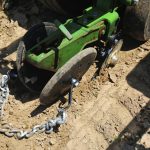 If you have been growing corn for the past few years, then you’ve heard about research regarding nutrient placement and application timing to optimize plant growth. One of the more popular products to be developed for that concept is the 360 Y-Drop system, from 360 Yield Center (that page is over here).

Building on that success, the folks at 360 Yield Center have developed the 360 Bandit. A small coulter-blade and drag-chain assembly is mounted on your row unit, allowing you to apply liquid nitrogen (or any compatible chemical) while planting. The 360 Bandit places the chemical three inches on either side of the seed trench, at about 3/4-inch depth—the idea is to have that nutrient bank far enough away from a germinating seedling to prevent burning, but near enough for a developed seedling to use the nutrients as a growth boost. The shallow-depth application provides less chance of atmospheric loss, while ensuring that the coulters and drag chains will not interfere with your existing gauge wheels, downforce, or closing system.

If your crop doesn’t require supplemental fertility at planting, then the 360 Bandit unit can be lifted out of the way, to reduce wear on the coulters.